Live Large In A Small World

No Widgets found in the Sidebar Alt!

No Widgets found in the Sidebar Alt!

Deboarding the bus in Hanoi after 30 hour ride coming from Luang Prabang, Laos, it would have been good to be anywhere. We found ourselves in the busy streets and bright lights of Hanoi.

Hanoi is in Northern Vietnam, its the country’s capital and second largest city. A few years back I travelled around four countries in Southeast Asia. While not my favourite country in SE Asia. Hanoi in Vietnam was by far my favourite city.

We were dropped off in the Old Quarter of Hanoi. We (Jack and I) wandered around in search of somewhere to stay. After a few attempts we found a suitable guesthouse. Next move was food. We found a Vietnamese style pub and headed to the top terrace for spring rolls and, after the bus ride from hell, a well deserved beer.

Mid way through the food Jack was having trouble finishing his meal. Odd, considering how hungry we both were 30 minutes prior and how we had not eaten since around 10am that morning. Not so odd when you consider where we had eaten at 10am that morning. 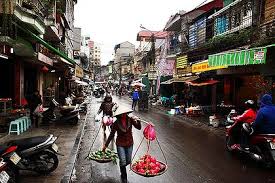 The only stop on the bus had been at a concrete shack in the middle of nowhere. It was the only stop for food the entire journey. Chickens and animals wandered around the open dining area while locals dined on colourful children’s stools. The kitchen wasn’t completely segregated from us or the animals either. As us tourist piled out of the bus everyone looked at each other sceptically, waiting to see who would be first to make the bold move of ordering something from here. Our bus left Luang Prabang at 6pm so it had been well over 12 hours since anyone had eaten. One by one everyone started ordering. I remember Jack being especially cautious with what to order. I personally have never been sick abroad so I tend to throw anything and everything into my stomach. After some serious contemplation Jack rested on the Pho. The national dish of Vietnam. A sort of noodle soup with shaved beef on top. We both ordered the same thing figuring we can’t go wrong with the national dish, right?

Jack was now looking pale. His beer was basically untouched as sweat beaded down the neck. This, I knew, was a bad sign. 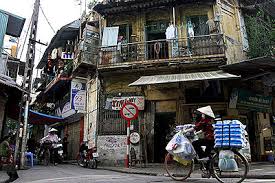 “No, I don’t feel good. We should go now” He said unsure of himself

We left abruptly, half jogging back to our guesthouse. Jack was out of commission for the rest of the night.

I woke up early after an unsteady sleep. Jack was on what he thought was his death-bed. He was dehydrated because he could not keep any liquids down. He kept mentioning going to a hospital. I don’t have a degree in medicine but I know that food poisoning lasts roughly 24 hours and then you’re sweet. But to make him happy and cease the whining, I told him I would search for some dehydrating tablets. I headed out onto the streets.  The day was in full swing. Scooters, scooters and more scooters everywhere you looked. Old ladies hurried down the street carrying baskets of fruit & veg. Men sat in tiny chairs hunched over playing chess. Smoke shops, watch shops, outdoor eateries could be seen from anywhere I stood. The streets were bustling everywhere. It was exactly what I had imaged an Asian city to be. Crowded, busy, unorganized and full of life.

I started walking, in search of a pharmacy. I walked for 30-40 minutes and found everything but. If you don’t know what to look for it can be extremely hard to find, that especially goes in Hanoi. When I finally did find a pharmacy and managed to explain hydrating tablets , which was quite difficult and I still wasn’t completely sure what I had purchased was the right medication, I realized I was lost. I hadn’t anticipated venturing so far for a few tablets. So I tried asking some people where I might be. Not many of the people understood what I was wanting to know. Finally, one man who was selling books out of a dresser drawer that was tied around his neck spoke some English. He pulled out a map and asked where I wanted to go. I really wasn’t sure but knew the name of the district. He quickly hopped on a scooter and handed me a helmet. “Come, Come” he motioned. What choice did I have I thought. I strapped on the helmet and got on.

We cruised through the most chaotic, unorganized, uncontrolled mess of civil design I had ever seen. The first intersection we approached I clenched my teeth and braced for collision. However, we breezed right through. After a few minutes, I loosened up. I realized that the streets were actually pretty safe.  It was almost like everyone has a mini magnetic field around them and they can’t be touched by others. Sort of like how millions of atoms are bouncing around in a molecule never running into each other.

I found a familiar street and I tapped the man to get off. He pulled over and handed me a stack of around a dozen postcards and told me to enjoy Hanoi and Vietnam.  When I came back Jack was still a bit of a mess but I could see that he was on the up.  I handed over the mystery tablets and wished him well. I needed to eat.

I rushed into the swarm of people once again and moved my way along the roads.  I was in search of another national dish. One with a few levels of standard above that of yesterday’s breakfast.  If you’ve been  to southeast Asia you’ll know that  menus are more like picture books than anything.  You pretty much base what you’d like to eat on what it appears to be in the picture.  So once I found something with a nice picture of Singapore noodles I strolled in, pointed at the pic and sat down. 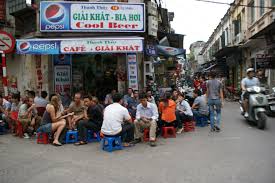 After what was some of the best Singapore noodles I have ever had,  I went to see if I had killed my best friend. I thankfully had not.  He was looking and feeling one hundred. I was pretty anxious to get him out and discover more of  the city.

We spent the next few days wondering the complex streets of Hanoi.

Food here is amazing. Its cheap, tasty, and very accessible.  My budget was of course street dining and low-end restaurants but you can find all sorts of great meals here. Sometimes if a restaurant is in a perfect location or has a great view I’ll break the budget and have a drink and small entree. We did this in Hanoi at a restaurant that was a couple stories up on a busy intersection. We did have the chance to tag along with some people who invited us to drink snakes blood with them. However, Jack wasn’t quite at that stage yet and it had a hefty price tag of $20 that we couldn’t justify at the time.

Very underrated place to shop.  We found multiple streets filled with vendors selling  everything. Clothing, electronics,  travel gear, jewelry.  If you’re looking for anything  from a fake pair of designer  jeans to knock off headphones you can be sure to find it. We also found some really rad skate and alternative shops that made quality clothes at great prices. I splurged and bought a shirt made from bamboo cotton for $10.

If you’re looking for a drink after a hot muggy day you don’t have to venture far. Pop down on a children’s stool in the middle of the street and grab a beer from the closets person selling them out of a cooler. The streets settle down a bit at night and  people break out the stools, peanuts and exceptionally cheap beers so everyone can socialize in Hanoi’s best spot. The street!  If you fancy something more lively  it isn’t hard to find a club with loud music and laser lights.  However, dancing wasn’t so much the scene.  We found the table next to us was more into playing a round of Jenga in the club. We of course were invited to play.

Wondering the streets while in Hanoi, I would say is a top attraction, especially the old Quarter. There is also the museum of Vietnamese history worth checking out. Catch a water Puppet Show, a classic in the city or use it as your hub before heading  to Halong Bay. One of Vietnam’s top destinations. It’s only an hour a 3 hour bus ride away.

Before going to Vietnam we had heard the people were less friendly and more demanding than the other countries in the area. I didn’t find this to be the case. Getting a ride on a scooter from a stranger. Playing Jenga in a night club and having street tea with randoms that want to take pictures with you is common… I think. The people in Hanoi were friendly and very interesting, to say the least.

Note: not all photos in this article are my own

8 Excuses Not To Travel & Work Abroad

Get Paid To Travel: What It’s Really Like To Be A Tour Guide

Navigating the globe can feel a bit overwhelming at times. Small World Travels is here to make the world feel like your backyard. I’m Josh, and I’m taking my twenties off to journey around the planet. After travelling through six continents and 50+ countries I want to help and inspire you to see everything this small world has to offer.